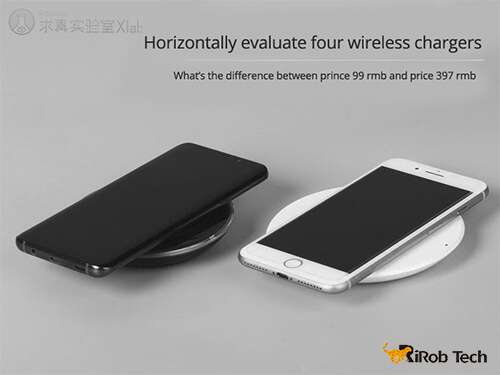 We choose these four wireless chargers for horizontal evaluation. They are Belkin Boost Up (for iPhone), Samsung EP-PN920, Xiaomi MIX2s, and Nanfu cool Bo AirCharge. 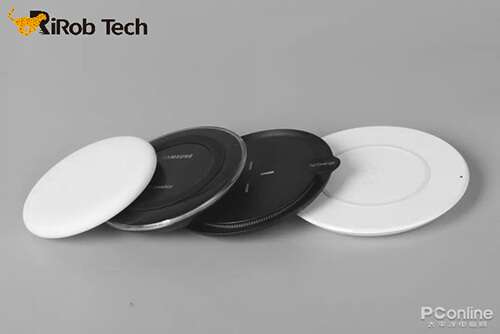 The four wireless chargers have the following parameters:

The researchers found that on the market the compatibility is different from each wireless chargers although most of them are nearly the same output power. As officially recommended, using their own wireless chargers for their mobile phones. It tends to be better than using other wireless charging pad. The charging power will be higher and the charging speed will be faster. It also means the Samsung Galaxy S9+ and iPhone 8 Plus will charge faster when uses their own or recommended wireless charger. Is it true? We can’t make the conclusion before the actual test. Researchers used iPhone 8 Plus and Samsung Galaxy S9+ this time. The charging condition was changed from “20% charge for 30 minutes” to “from 0% charge to full”. Let’s looking for which wireless charger is more powerful.

We mentioned that the power will be charged from 0% to 100%. The power will be run out to the natural shutdown of the phone. Cooling down the mobile phone for several minutes. Then the wireless charging testing started. During the charging, every phone will insert SIM cards, shut down the screen, keep WiFi in, and other normal functions.  The voltage, current, and power were recorded in every 5 minutes.

Especially, the Belkin Boost Up wireless charger’s adapter is their own. So a miniature power monitor had to be used to directly record its input power. The remaining three wireless chargers’ plug is Micro USB or USB Type-C. So a Power Z USB tester was used to get the output power of the adapter. The XIAOMI MDY-08-ES is used to supply power to the wireless chargers. 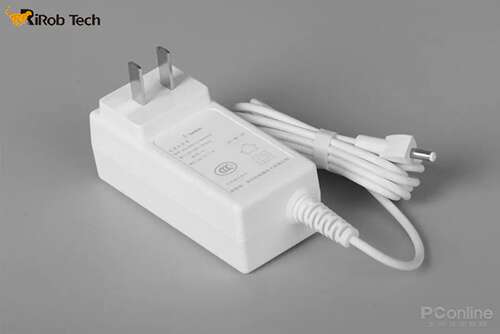 The adapter of Belkin Boost Up 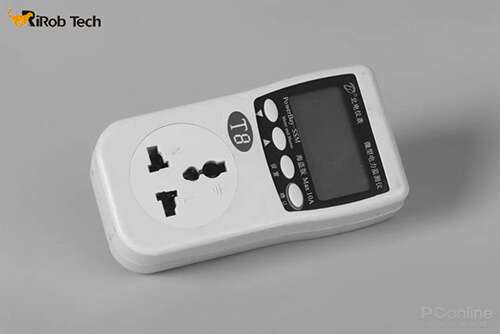 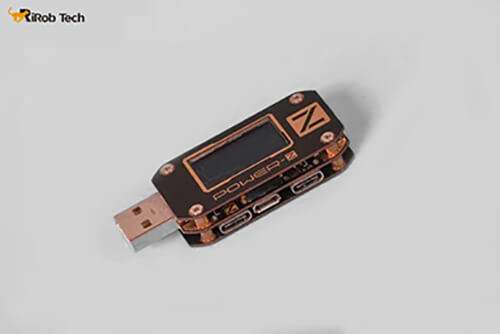 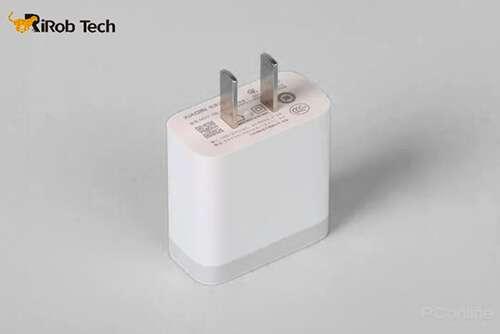 PS: Since the Belkin Boost Up wireless charger directly detects the total input power, this data includes the portion consumed by the power adapter. So the data is about 0.5 to 1W higher than the other three wireless chargers’ recording.

About the recording. Since Samsung Galaxy S9+ has Lock Screen Notifications, the power volume displayed on the screen. The time of fully-charging for Galaxy S9+ can be accurate to 1 minute. However, iPhone 8 Plus need to light the screen to get the time. So the time of fully-charging for iPhone 8 Plus can only be accurate to 5 minutes. But 5 minutes is acceptable. 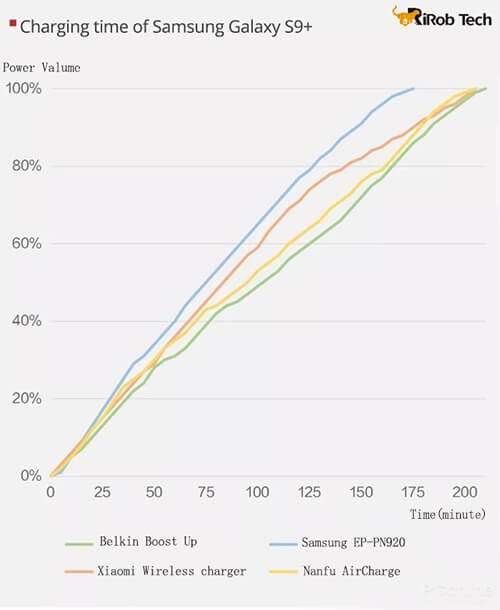 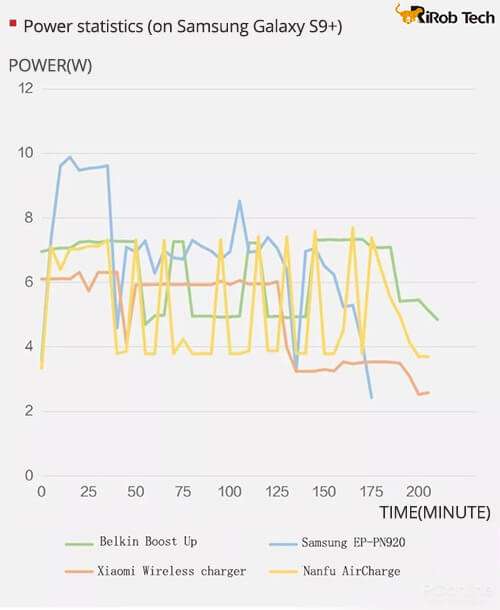 According to the charging power data, it is more efficient when using Samsung’s own wireless charger. The first 40 minutes of power is high enough and the peak close to 10W. But other wireless chargers’ peak power is only maintained at between 7 to 8W.

Graph of iPhone 8 Plus

Charging time Statistics (on iPhone 8 Plus) 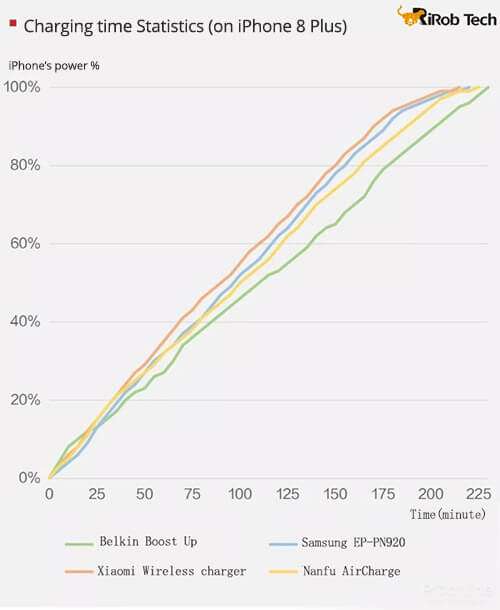 As a matter of fact, iOS 11.3 adjusted the iPhone’s wired and wireless charging rules. The fast-charged cable must use Apple’s PD fast charge cable. In other words, you have to use the official USB Type-C to Lightning cable for fast charging purpose. However, the wireless Fast charge was suspended. So it is Belkin’s solution to the mystery.

Power Statistics (on iPhone 8 Plus) 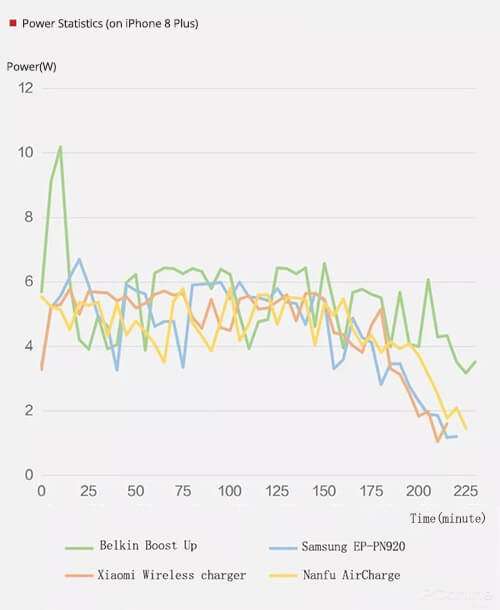 From the above figure, it can be seen that Belkin Boost Up seems to have a superior charge power. But what it counts is its total input power. In fact, the power consumed by the power adapter must also be deducted. Therefore, the calculated output power and other wireless chargers should be no different.

The researchers compared the iPhone 8 Plus on iOS 11.2 and iPhone X on iOS 11.3. Test their average power when they start charging from 20% of electricity for 1 hour. The result is that iPhone X is 6.76W, while iPhone 8 Plus is 5.87W. The test result shows that Apple further limited the charging power in the iOS 11.3 system.

Reminder: There are many lower prices wireless chargers in the market. It is recommended to purchase it carefully. If the low-priced product does not have the FOD(foreign object detection) function, if the metal item is inadvertently placed on the poor quality wireless charger, the metal may be rapidly heated. This may cause an accident.